What's in your bag? More report on the iPad journey

Hi @PT_Ken — I haven’t been following this thread closely, but have you looked into moving more and more of your activities to be cloud based and/or local to your iPad? “Cutting the (virtual) cord” so to speak.

@idea2go Good suggestion. Yes, in fact, I already am largely cloud-based. However, Many of the apps I need to use require my laptop. Many have no iPad (mobile) app, some are download software only, and other are web apps but require a desktop (laptop) computer and will not run in the mobile browser. Examples are Video Scribe which is download only and Reevio which won’t run on a mobile browser. But with this new setup, I can have it all, plus do what you are suggesting whenever possible.

In other breaking news, I received my new iPad bag. My previous computer bag weighed in at 12.5 Lbs. Not outrageous, but it gets heavy and cumbersome after carrying it around all day. The new bag, after getting rid of stuff I don’t need anymore, is only 5 Lbs.!!! I lost 7.5 Lbs in the bag.

I’ll post pictures for comparison soon, but a toddler seems to find ways to make getting these pictures difficult.

My ultra-portable workstation setup consists of an iPhone 8+ and TextBlade in one pocket and a Swiftpoint GT mouse in the other. For email, text editing, and the like I just use the iPhone and TextBlade and apps like Mail, Editorial, Working Copy, TextTastic, etc. If I need PC-related apps, I use Jump Desktop along with the Swiftpoint mouse to remote to a PC.

FWIW, my standard “what’s in my bag” workstation consists of ~2 pounds of equipment:

439835B1-E6D1-49D0-A5EB-C940604C86AB.jpeg4032×3024 3 MB
The Swiftpoint GT dongle is “permanently” plugged into the USB port on the Surface Pro where it acts as a charger and mouse holder (magnetically held in place when traveling). When on the move, the TextBlade goes in my pocket, so I’m just carrying a leather-wrapped tablet with a mouse sticking out the end - super portable.

Occasionally while walking around, I’ll accidentally hit the mouse on something, knocking it out of its magnetically affixed home, and I have to pick it up, but this happens pretty rarely (~once every couple months).

That’s awesome! I could do this too, but I need to carry some extras with me. Besides the 12.9" iPad Pro, TextBlade and SwiftPoint GT mouse, I also carry my charger (because I work 8-10 hours straight and the iPad won’t really last that long), eyeglasses in a case (wear my distance glasses but need to have computer glasses while I’m working), Kindle (because reading is so much better than on a tablet or Phone, plus I can use it as reference while I work on the screen on something else), my work badge and subway pass (because there is no place else to put them!), and wireless earbuds because I do a lot of work that requires audio (or else I listen to Brain.fm while I’m working). All together it’s about 5 pounds.

My other bag was larger and heavier just for the bag, I also needed my laptop charger/power cable (heavier), cable lock to attach my laptop for security when I have to walk away, umbrella, etc. You get the idea. I had extra stuff that I either don’t need anymore or chose to remove because of the effort to downsize.

What you have is about as minimal as it gets though! Kudos.

Curious, what do you use as a stand for the tablet? Or do you just lay it down?

Curious, what do you use as a stand for the tablet? Or do you just lay it down?

The Surface Pro has a kickstand built in.

Newcomer to the forums, with a question for those of you with a TREG unit: do any of you use a Bluetooth trackpad, and if so, which one?

I own the Swiftpoint mouse - it’s OK, but I would much rather use a compact trackpad. I also suspect, based upon my current use of this Kanex compact folding keyboard, that a trackpad would be a better match for the TextBlade than a mouse. The Apple trackpad comes closest to what I’m looking for, but it’s bigger than I would like.

Many thanks in advance to everyone for any thoughts or comments.

I never followed these posts carefully. I always read them, but I wasn’t that focused on the subject so I probably don’t remember much that was written.

But now I’m looking at small ways to make my one big trip to the mainland each year a little easier. My main issue is charging. I’m not concerned about a battery pack, but rather the standard USB charging system where I plug into a wall socket.

I normally expect to need to charge an iPhone, iPad, and Apple watch. I would like to have separate cables for each that I can plug into, I guess, one small hub.

One issue in the past has been having the lightning cables long enough to reach wherever I need them to reach, but I’ve decided to take a different approach. I’d like a 3-4 port hub, but I think I’ll use very short cables (less tangling and less space needed). I’ve seen something like 4 inch cables from “Amazon Essentials”. Are they okay?

But I also need to decide on the hub. Ideally I’d like to charge things fast rather than slow so how much a hub can put out makes a difference. I can get by with slow if there is no better option though.

The biggest difficulty is finding a short cable for the Apple Watch! I saw one on Amazon that was listed as an Apple product (about 1 foot, I think), but reading the reviews, it seems it is fake (why can’t Amazon block these?) as a number of reviews have said they get messages when they tried it that say it isn’t compatible. So, while it got a lot of good reviews, I don’t trust them. I’ve never seen a short Apple Watch cable in their store. I know, supposedly, there is an Apple approval system - no doubt many lie about - but don’t know if there are any for the watch.

I tend to use one of the Anker multiport chargers for this purpose. The main hub part being roughly the size of a pack of cards is reasonably compact. I then have 12” cables for each device I want to charge simultaneously. Since I am UK based I also change the Mains lead for one which is specifically designed with foldable pins at the Mains end (UK Mains plugs are otherwise bulky).

The Amazon Essentials cables are fine, I have several. They are good quality and have outlasted Apple ones that came with various phones.

Any particular Anker models you recommend?

They are good quality and have outlasted Apple ones that came with various phones.

That’s interesting. I’ve always felt the Apple ones wore out at certain points too easily.

Check http://incharge.rocks that is what I use.

If two ports had been enough I would have recommended this one for you. Cannot find it on their site though anymore. 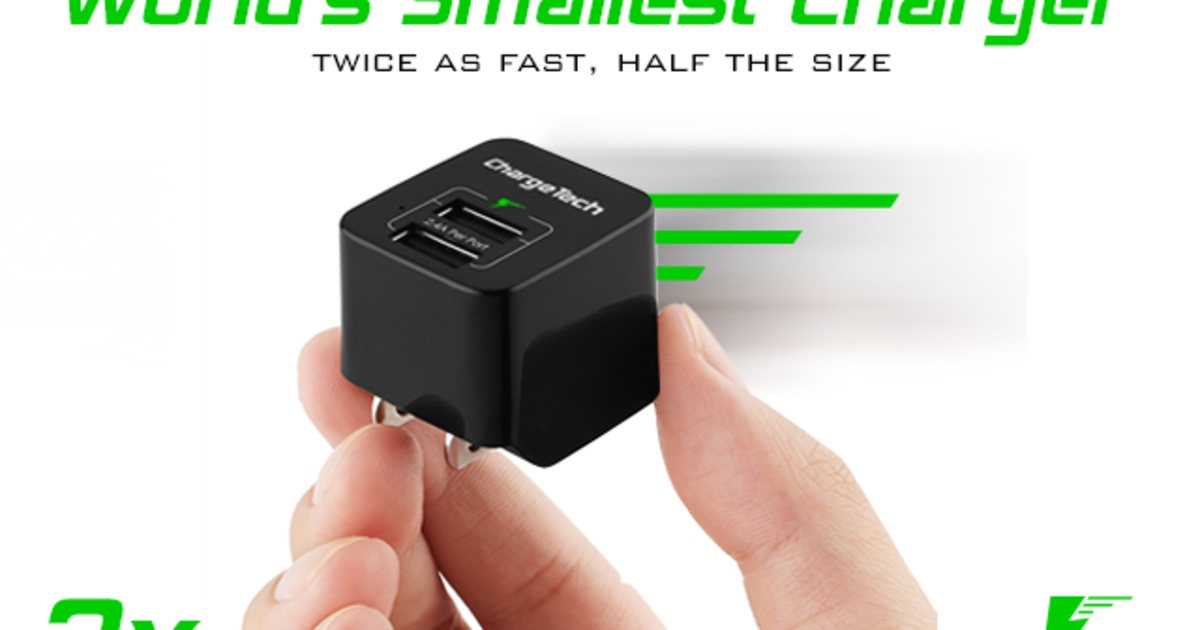 Twice as fast and half the size. The world's smallest phone charger with two hi-speed USB ports. | Check out 'Charge your phone Twice as Fast - ChargeTech' on Indiegogo.

I ended up removing the Apple Watch cable from my bag and replacing it with this: https://www.amazon.co.jp/gp/aw/d/B0791X7BNT/ref=ya_aw_oh_bia_dp?ie=UTF8&psc=1

It doesn’t take up much room and can still give you a full charge even if there isn’t a handy power source.

Each port senses charge needs each device and is barely bigger than the apple brick.

Check http://incharge.rocks that is what I use.

Looks interesting, but reading some reviews said it isn’t Apple certified and some people said it wouldn’t work with their Apple devices (did work for others). So that’s a bit concerning. Also saw something about a regular and a thin version, but I couldn’t find anything detailing the differences.

I ended up removing the Apple Watch cable from my bag and replacing it with this: https://www.amazon.co.jp/gp/aw/d/B0791X7BNT/ref=ya_aw_oh_bia_dp?ie=UTF8&psc=1

Also looks interesting - though it has 20% one star reviews.

I also stumbled on this which, if actually good, would seem to fit pretty well since it could hold the watch to charge as well as 3 other devices: 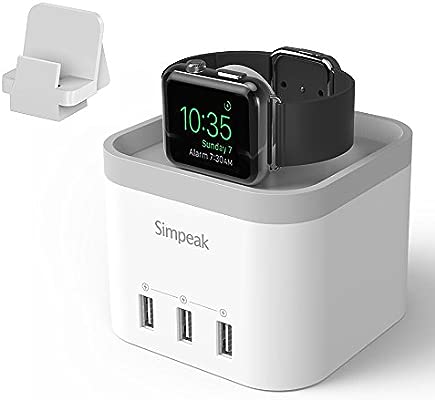 It has 12% one star ratings. I’m amazed at how often reviews of various things like this say they stop working quickly. How hard can it be to make something dependable?

Each port senses charge needs each device and is barely bigger than the apple brick.

Looks decent too. And only 2% one star reviews.

I use a Syncwire 4x block with travel adaptor. It’s pretty sweet, I add my Apple watch cable and a long and short lightning

I also stumbled on this which, if actually good, would seem to fit pretty well since it could hold the watch to charge as well as 3 other devices:

Note :Apple Watch Magnetic Charging Cable and other device accessories are not included. You Must Know before Start to Charge： 1. Before use, please ensure that the voltage is in the range of 100-240V …

It has 12% one star ratings. I’m amazed at how often reviews of various things like this say they stop working quickly. How hard can it be to make something dependable?

I’d be careful when looking at Apple Watch stands since I haven’t seen many that come with a built in charger. Most require that you use the Apple charger and won’t accept anything but due to size.

It might be a convenient place to hold everything, but beware that you will need to supply your own cables.

Oh, I already know it doesn’t include the watch charger or cables to charge other devices. That’s just fine, as long as those ports all work for a long time! 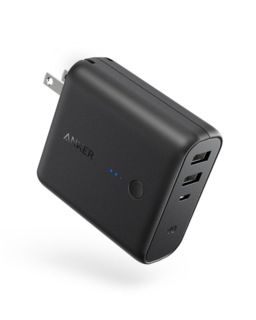 On the cable front, I’ve been using a short Belkin USB-Lightning cable since they first came out - it’s outlasted every other Lightning cable I’ve owned. Unfortunately, Belkin no longer seems to make this cable, and the reviews for their newer models are not encouraging. I’ve had good luck overall with Monoprice cables, but have not used them for this particular purpose.

I don’t currently use an Apple Watch, so I can only comment on what fellow travelers have recommended. The consensus has been that compact power banks with passthrough charging offer the best weight/convenience tradeoffs, provided that you don’t expect to get more than one full charge from the power bank. This Griffin power bank is one option I’ve seen used successfully:

The Anker battery/charger looks interesting. But the Griffin watch charger option is darn expensive! I could almost buy a TextBlade with that!