The Octodon - a very odd, different keyboard for mobiles

I thought folks here might be interested to the the very different design choices made by this company that’s live on Kickstarter but not getting much traction - only 38 backers to date. 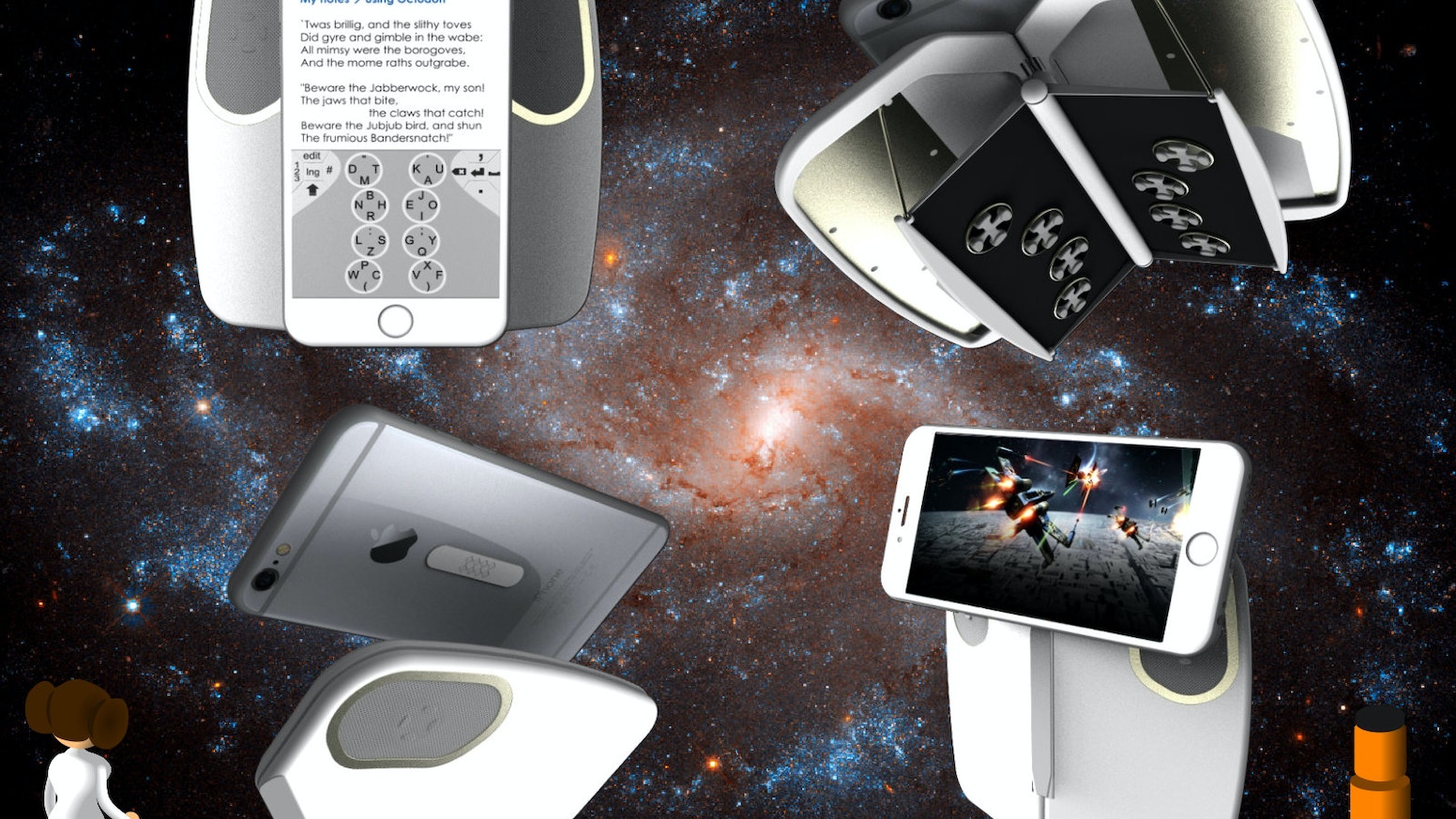 Bring the speed and precision of a full-sized physical keyboard to your smartphone. May the productivity be with you!

That is really weird.

Cheezy advertising. Neat idea. For everyone cringing about the amount of time it is taking to bring textblade to production. Imagine that times 10. Doesn’t look likely to hit it’s funding target but it’s nice to see innovation.

I’ve seen that before a few times, I seriously doubt it is going to work out.

This is a joke. Is this a joke?

This is precisely the kind of stuff that makes a forum interesting and fun. Thanks to ricb for posting.

The octodon is one of many keyboard concepts that use rocking, tilting or sliding motion to select a character. These approaches have in common that they use a single key per finger, but those keys have other dimensions of motion besides a simple strike.

If you look at our 2003 patent (see “Tri -Blade” in WayTools/us/patents), you can see that more than 12 years ago, we were also exploring ways to let you use other degrees of freedom for key input.

We actually built systems that did this back then, and tested how it affected usability and cognitive focus.

What we found is that schemes that diverge from a single, rapid, strike to get a character, inescapably reduce speed and cognitive focus.

That’s why over all these years, they’ve never gotten traction with consumers. In simple terms, they don’t work as well.

Designing a keyboard around the constraints of a smartphone, instead of the needs of our hands - is backwards. To get this right, we had to first ask what the hands want, and build from there.

Typing is about what fingers need. Striking on a moveable key with appreciable travel, well-defined force feedback, and tactile surface qualities - is uniquely well matched to what our fingers excel at doing.

Fingers are incredibly sophisticated biomechanical manipulators, exquisitely instrumented with sensors that can perceive even slight physical differences. The input system must be equal to this.

Typing is a kind of kinetic ballet, where the bounding off of one key to segue into the next one - is integral to the dance.

Without the right elements, it falls flat. But with them, it is a uniquely satisfying, even thrilling experience. The instrument disappears into the background, and we are in the zone, making music - or in this case, sculpting a thought.

Experimentation with alternative technology is the lifeblood of innovation. But discerning which new elements to put in and which to leave out - that is the art of it.

Only a few companies (like Apple or Tesla) have shown the wisdom to know the difference.

Or yet another different "future " approach with a steep learning curve and adapted for two thumbs and a screen or button set. https://www.kickstarter.com/projects/forrestmaready/crosstap-universal-typing-software-from-the-future
Sorry, don’t know how to put the link just under a clickable Crosstap.

Al interesting solutions, I’m waiting for some customer reviews as my current writing solution in a low tech environment is the same pricetag as the textblade, but still involves ink flowing from reservoir to paper

(Lamy Studio) Textblade will probably be high on my wishlist layer this year, keep up the nice engineering

It’s probably the case that QWERTY is so entrenched in our global culture that, except for non alphanumeric languages, it’ll be here to stay. Typing QWERTY is quite fast. Speech to Text is very good now, for those that need their words entered at the speed of sound. I actually like typing over StT because it allows me to slow down enough to choose my words and phrasing more carefully.

Alternative keyboard designs have been tried for a long time. Douglas Engelbart (inventor of the mouse, among other things) invented a chorded keyboard in the last 60’s. It worked by pressing multiple keys for different input. But even that early keyboard ‘alternate’ was preceded by 100 years with the stenographers keyboard which works similarly.

There will always be alternatives, like DVORAK and other key layouts. Back when I used my Compaq iPAQ PocketPC I used Fitaly. It was really fast, for a 1 point input keyboard. Swype and other on-screen keyboards are great for using a couple of fingers. But like Waytools said, there’s something really satisfying about real keys with key travel.

The most popular keyboard input method will be QWERTY for a long time. In fact, it might stay that way up until we have neural links that allow typing without fingers or even speaking. Until then, I’m guessing it’ll be QWERTY.

That said, there are still ways to improve input from keyboards without having to totally reinvent it. Having a keyboard which is split and tilted toward how hands are naturally positioned is great. (Though too large of a space between the split and it’s a much different typing experience which isn’t as cohesive as when the keys are still together in a unit.) And use situations will cause changes to the keyboard. Waytools’ TextBlade keyboard wouldn’t have come into existence (or at least, wouldn’t have gotten popular) without the prominence of tiny computers in need of keyboards (aka, mobile phones and tablets). When I’m sitting at my desk I have no use for a small keyboard and love a large one. (Though having a more ergonomic keyboard would be nice.)

I like the extreme portability of the TextBlade keyboard. This is of course what brought me to it. I’m still intrigued to find out if the closer keys of WayTools keyboard are going to make things better or not. Time will tell. The innovation which went into how it is carried, how it fits together when set up to use, and how it is charged (and powered) is all amazing.

Innovation is exciting to witness and experience.

These alternative solutions all have one advantage that TextBlade doesn’t have, which is being able to type without having to place a physically separate typing tool on a flat surface. This is the number one issue with TextBlade IMO. I need to be able to type on my phone no matter where I am, even when just standing at a corner, standing in line at the supermarket, lying down on the sofa, etc.

I’ve already suggested the solution of placing thumb-rings under the TextBlade, but that’s not enough, since the TextBlade is still a separate piece of hardware. If I were to type on it, where would I put the phone if I’m standing or lying down?

The obvious solution is to physically couple the TextBlade with the phone in some way, like a docking mechanism, but one that can be used while standing and holding it in two hands. Octodon does that but the size is a bit too big. I think it’s possible to design the TextBlade in a new iteration so that if we hold it in our hands while typing (in a vertically angled position, with the spacebar pointing up), there can be an attachment piece (some kind of clip) that holds the phone upright at an angle.

That’s funny. I’ll stick to setting the TextBlade on my newspaper blanket upon whichever park bench I happen to bed down on. I’ll keep an eye open for parking meters with maximum time remaining, then slam that bugger down on the trunklid for long periods of uninterrupted composition time. Whenever I find myself standing about without a place to put TextBlade, I can always stretch out prone on terra firma, parking lot or sidewalk, relax and bang out some long-winded emails.
I will never treat touch typing the same as texting with my thumbs (nor walk about so blindly), and will become adept at finding comfortable places and positions in which to ensconce myself. I anticipate no “obvious solutions” requiring me to use any keyboard anywhere at any time. Many customers will use theirs with a cell phone; what need is there to negate the phone’s primary function?

Well, different strokes for different folks. I’m a writer and new ideas happen anytime, anywhere. It can be in a half-awake state in bed, or while showering (I keep a waterproof notepad and a pencil in the shower), or while standing in line at the supermarket. When in situations I cannot use the audio recording function on my phone to quickly record the flash of inspiration (such as in bed sleeping next to my wife, or out in public in a quiet place), typing on my phone is the best choice I have. Although I do have a Galaxy Note 3 which has a stylus for handwriting, my handwriting is so bad that I often can’t read it afterwards. So typing is the best solution for my needs, and typing on the screen with thumbs is just so slow, inefficient, and mistake-prone.

So basically, we can’t assume other people’s needs and preferences are the same as ours. There are things you need that are useless to me, and there are things I need that are useless to you. For example, a smartphone to me is really a palm-sized computer, and its telephone capability is only a small part of its usage in my life. I use smartphones far more for apps, doing things like writing, composing/recording music and audio, sketching/painting, taking photos/videos, reading ebooks, email, the web, news, online shopping, calculator, weather, listening to podcasts and music, watching videos, calendar/tasks manager, dictionary, GPS navigation, photo album, video games, etc. To only think of smartphones as mainly a phone is a very outdated mentality.

That’s me; outdated! Perhaps a large ferrite belt buckle to magnetically anchor a TextBlade–I’d look either like I was chronically itchy or a gunsling just twitching to draw. With all of TextBlade’s onboard memory, the keyboard alone could store typewritten notes as another kind of digital recorder. Upload when convenient.
I own a simple cellphone, not a smartphone. My wife and I live with televisions, iPads, iMacs, kindles and a Sony digital paper tablet. My needs in life are few, but I love playing with technology. If I owned and relied upon a smartphone, the toys I presently enjoy would become a little less necessary and desirable, although I do tend to favor purpose-dedicated devices, outdated as that may be. For years at my workplace I carried a pad of paper in my shirt pocket. That and a pen or pencil served me wherever I happened to be–no batteries required. Outdated does not equal obsolete. We do what we can with what we have–I long ago adopted printing block letters to keep workplace notes (three shift operation) legible for fellow technicians.