Is your replica available for preorder ?

As with all replicas and knockoffs, buyer beware!!!

This one has issues such as:

And for all those who haven’t figure this out yet:

So how do DeX differ from just using Sentio (former Andromium) or Leena launcher? Is there a better window management or are there more features?

I think Dex may differ in that there are apps optimised for it that can run in full screen / desktop mode (eg ms office apps, Amazon workspaces) and on higher res hdmi monitors. Newer Dex pad with S9 can do more than 1080p. Dex is only Samsung phones though. Will run proper Linux soon apparently too https://youtu.be/XPFemeuCTYg

(but alas, can’t see the cables, battery and barely phone because of my shoddy photography skills)

There is only so much I can do with a JPEG file, but since digital imaging is my field, I couldn’t help myself! Here is a view of the cables, battery, and phone for those who want to see it.

Extra points for reskinning the TextBlade.

I have been toying at the idea of building my own minimalist keyboard (given there is only so much imaginary playtime I can do with blue felt-tip based paper version of TextBlade). There is a whole group who appear to do this sort of thing http://geekhack.org. Perhaps if gin doesn’t get in the way, I should just open source something that has the basic components involved (HHKB controller, keycaps and 3d printed mount etc) that does enough of a job to be semi usable (of course not counting on class action lawsuits in this plan…)

All I want is a bluetooth keyboard that can fit in my pocket, and isn’t made of paper

Hope you have all the bugs worked out of it because now that you’ve announced it, you won’t hear the end until you ship it!

I can ship paper version now for free if that helps

(caveat - non Dvorak / fancy version that isn’t US / UK QUERTY btw, and when I say “ship” I really mean a PowerPoint file that you can download and print yourself on a real 2D physical medium (aka paper) - might do that tomorrow instead of dayjob)

I think if you hook your prototype up the this technology, you may have something.

There is a debate as to which is better – writing the good old fashion way with pen and paper, or typing it onto a computer. No doubt the...

Your keyboard could be lighter and thinner than the textblade, probably at the expense of the feel of the keys. And of course you’ll need a few years to work out the kinks… 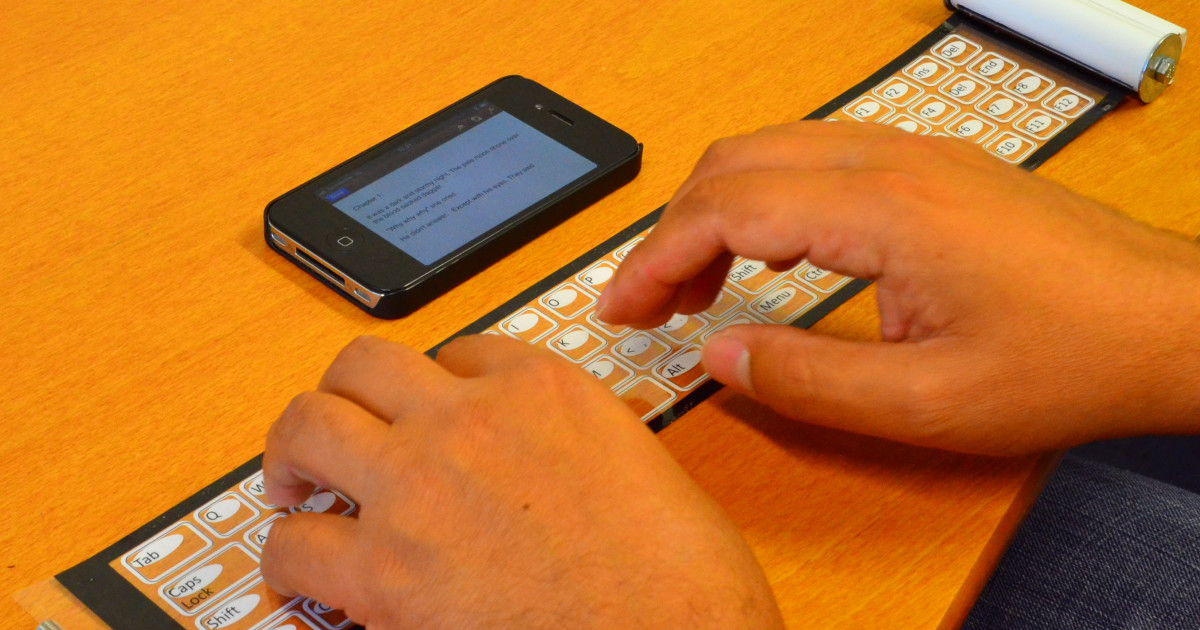 Qii - the world’s first truely full-sized wireless keyboard you can comfortably put in your pocket. | Check out 'Qii Rollable Full-sized and Pocket-sized Keyboard' on Indiegogo.

That’s an interesting concept - sort of what I expect from many mobile keyboards in some ways. Such as almost certainly a lousy typing feel, so you are compromising for that portability. It is a heck of a lot more compact than the typical mobile keyboard though.

I may have missed it, but I couldn’t find anything about an expected price once shipping - just prices for early adopters - and apparently there are two levels.

My best guess is that the regular price will probably be $100 for the basic unit, so the same as the TB.

But I didn’t see anything there about pairing to multiple devices which would, at least for me, make it a lot more expensive since I’d need more than one unless I went through the hassle of re-pairing every time.

Also, now that I’ve used the TB so much, I have seen how having totally individual keys make it easier to tell if you are hitting the keys correctly. After all, before getting used to the TB, almost all my errors were hitting a different letter on the same key than what I wanted. You can feel the “wells”, but it isn’t as obvious as a separate key.

I imagine this thing would suffer from that even more.

But if I didn’t have a TB to compare to, I’d probably look seriously at this roll-up device just for when I’m desperate and limited to my iPhone or iPad.

Yeah this is like moving the on screen keyboard. I was very interested at the time, but I think TB wins every challenge over this.

It looks like they did a couple fundraising campaigns. I saw an article that said the first one was looking to raise 1.8 MILLION dollars and, at the time of the article, they only had $9,000. So close!

I’d say it’s darn hard to develop a really good alternative keyboard. I’ve seen lots of folks point to some new concept, but every time it is more like they have, at most, maybe one or two nice ideas (which may or may not actually be practical!). But taken as a whole, they all have major compromises. I have seen large keyboards I may like - ones with lots of programmable keys for example, like I have with my mouse. I mean, if I had to use a big keyboard anyway, might as well have lots of options that way. But for me, that would be the only real advantage of such a device over a typical keyboard. And with all these layers on the TB, I effectively have lots of extra key options anyway. Far more than any other keyboard I could buy.

I’m still amazed at how a keyboard can be made more mobile than just about anything else and do most things better!

Interesting to note in their concept the integrated touchpad as part of the base.

Unlike TB’s spaceblade their base is way off to the right and requires removing hands from the keyboard if you use it as a touchpad, but from a portability standpoint that’s really nice to have along. Also like the concept of the basic keyboard which unrolls further for an extended keyboard.

I tried early roll up keyboards and was profoundly disappointed. This seems a quantum leap from those but, as per @dabigkahuna’s research, it appears they never found a way to get qii off the ground.

Yep, the touch thing was nice though I wonder how well it works on such a small and curved area.

Non-paper version of Textblade with Dex

(thanks for the TREG invite @waytools!)

Generally works really well, but Dex appears to have some weird keyboard shortcut mappings so whenever i attempt to copy text on TB, contacts app opens. Cut closes the current app. Will look into remapping/disabling shortcuts on Dex side… or just wait for a proper OS in this mode (linux on galaxy / dex)

Using phone as touchpad does work, but annoyingly cant move windows around hence why using the Logitech T630. Also easy to accidentally touch it when typing which can mess things up a bit.

No issues at all pairing to mac, ios and android - once i learnt what was chord key was and that holding them down put each slot into pairing mode (thanks for the help @dabigkahuna)

Yeah, but can you crumble up your new TextBlade like you could your paper version?

Have you checked you have the correct OS selected for the Jump Slot used for the Dec? Setting it wrong can produce unexpected results as Apple devices use CMD in the shortcuts where other OS use CTRL.

Have you checked you have the correct OS selected for the Jump Slot used for the Dec? Setting it wrong can produce unexpected results as Apple devices use CMD in the shortcuts where other OS use CTRL.

Thanks! that was it, I set the jump slot to Android and works fine