I am struck by your courage!

Suddenly this topic is of interest to me.

I’ve just had surgery to reattach my bicep tendon so I’ll only have use of one arm for a while. I really hope for a quick recovery but it got me wondering, how usable would the Text Blade be one-handed? Is it even possible with the required chords, etc?

@waytools maybe I can be guinea pig for this use case? Lol

In my opinion, a standard keyboard is better for one-handed operation for everything except the 36 alpha layer, 36 shift-alpha layer, a space keys.

I think for most cases it will be as useable as a standard keyboard. The key special modes (edit, numerical) have locking chords, and things like shift and function act as ‘sticky’ mode. The most likely area that would cause problems are those involving modifier keys such as Ctrl/cmd or alt. This can be alleviated by enabling ‘hot corners’ on the spaceblade.

I guess the only way to prove it would be to try it in that mode, and even then it will depend on what type of work you are trying to carry out.

I am significantly interested in this topic in general. I was curious about how well the TextBlade would work for people with missing fingers, though to be more clear, loss of mobility of the fingers.

Because of Dupuytren’s contracture (aka palmar fibromatosis) fingers gradually become pulled up into the palms of the hands and the mobility of the fingers is lost.

With the significantly reduced vertical travel of the fingers, typing would be considerably easier where the mobility of individual fingers is only compromised. For the more immobile fingers, the ability to reprogram individual keys would be a boon!

I do hope that WayTools has at least one accessibility specialist on their team.

This isn’t a super cheap option, but if you want the one-handed QWERTY experience, there’s an app on the Mac App Store with predictive typing that gets around the usual one-handed QWERTY restriction of holding the space bar for the mirrored right hand. It is admittedly fairly expensive, but there’s a free demo version you can try out as well to see if you find it helpful.

Thanks @michaelmcgaw I hope it works out well too! With all the modifiers and chords, I can l only see that the Text Blade would be a pain to use one handed. Coding on a regular keyboard with one hand is frustrating enough.

I do wonder if @waytools have given accessibility much thought as it’s a big area and I’m sure they could come up with something clever.

Although, attempting to press shortcuts like Alt+Enter on a regular keyboard is impossible with one hand. Maybe this would be achievable on a TextBlade as there wouldn’t be as far to reach.

Ok so now I’m out of my cast and in a restricted range of motion brace. Moving my arm is out of the question at the moment and moving my hand is difficult. I think now having the text blade would be a God send. The angle of the blades would help as would the reduced finger travel. It’s real slow, hard work reaching with a normal keyboard at the moment.

How about a TREG unit to try with @waytools?

Reviving this topic to see if any new ideas popped up. I have a friend who just broke his wrist and he can only type one-handed now, and I was wondering if the upcoming firmware would allow flexibility in chording @waytools?

I’m thinking that if I were in that situation, I’d map the green layer to the mirror of the other hand, but then to access symbols it’s harder. Shift+green layer would be needed for capital letters, so one option would be to use the hot corners for a secondary green layer. Depending on mobility, a second modifier could be added, but that would require detecting both hot corners at the same time.

So I guess my question is: how configurable will the new firmware be? Can you make up new chords, locking chords, layers etc? Great flexibility would allow for great accessibility.

Getting really simple chords going is vital to one-handed operation. The green layer is ace, and you can easily reach one of the hot corners, but t’other one could be quite a stretch, especially if you need it with one of the keys on the far side of the board. Something that the blade doesn’t seem to support yet, but could be quite easy, would be a quick tap followed by a hold of the space bar for an alternate layer. If this was done with hot corners as well, then you go from 2 easy layers to 4.

Infact, that’s something that i’ve just decided that I want, even with 2 working hands

It does mean that you’d need to be quite deliberate if you want a space followed by a green layer character, but I reckon it could be pretty cool.

That would be a nice feature, but I’d only want it for the hot corner.

Then we’re agreed, it’s an awesome feature that @waytools should add as soon as the new fork is done!

Another example of the kind of emergent needs that compelled us to build it for general release.

I loved having a couple of easily-reachable, single-key-hold layers in my ergodox firmware. I miss the numpad layer that I’d set up there when using my tregblade, and i’m not that keen on using the sticky layer toggle numlock mode as I never spend long entering numbers, but a pad feels better than the number line, even with the easier reach that the blade gives.

Well, I use the emoji layout (converted to Dvorak rather than based on the default qwerty). Since emoji is activated by holding the right hot corner, that gets you partway there.

Even a simple chording of using the space with one hand can work pretty well. I’ve played with the software version of the Matias half keyboard and it is amazing that the brain does the mirror image mapping without much effort at all.

Hope that a full chord keyboard could be implemented as well, which would be fun to play with.

I got to thinking about this some more and I suspect, for many people who would need the one-handed option, many would still be able to use the other hand, but in a very limited way - but it could make a huge difference.

As an example, let’s say you use the emoji keyboard layout to give you that extra layer where you hold down the right hot corner. But you’ve hurt your right hand so you can’t touch type with it and maybe it has a heavy cast on your arm that makes hunt and peck very strenuous. So you use the left hand only.

But, depending on the injury, you may well be able to use the right hand a little and it can make a huge difference. Even if I only have use of the right thumb, I can use it for the green layer and the emoji hot corner. And if another finger can be used, especial if towards the other end of the hand, that can use shift. Thus the left hand would only be doing the other things. Heck, even some of those other things can be done by the same right finger that would do shift. Even if you had to move some of them to a more convenient key. So you could handle Enter and Delete on that hand too.

On the left hand, even if you didn’t touch the extreme left positions (tab, home, shift), you still have 15 spots. Green layer gives you 15 more, and emoji lay brings the total to 45. Of course, you have more by using shift, which would probably be pretty much as now, except half would become green/shift for uppercase and just green for lower case.

Maybe numbers moved to the emoji layer, on two rows.

Of course, it is still important to figure out best ways to use ONLY one hand, but for many, even one useful finger can make quite a difference in options and fluid typing. 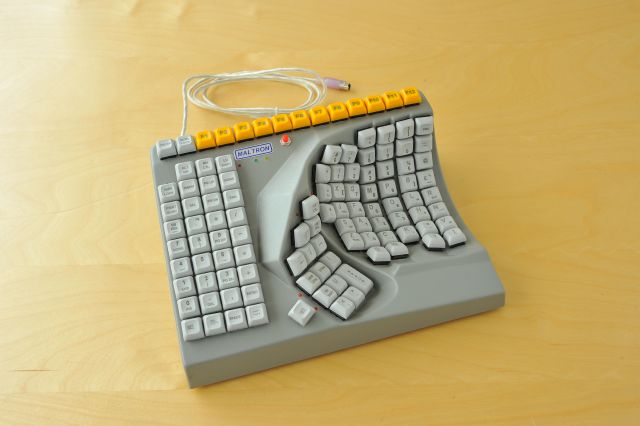