Input methods are constantly changing. I find it very unusual that the lowly keyboard has survived from the mechanical age and into the electronic age. As we move forward we may well leave this input method behind with digital assistants, Siri, Cortana, etc., becoming more feature rich. In addition to those, there are some interesting apps/services being created that are taking us closer to conversational input.

To quote Scotty: “Keyboard. How quaint.”

I think there is a ways to go yet. Maybe something like the TextBlade will extend the keyboard lifespan, but we may be one or two breakthroughs from a completely new paradigm for human computer interaction. 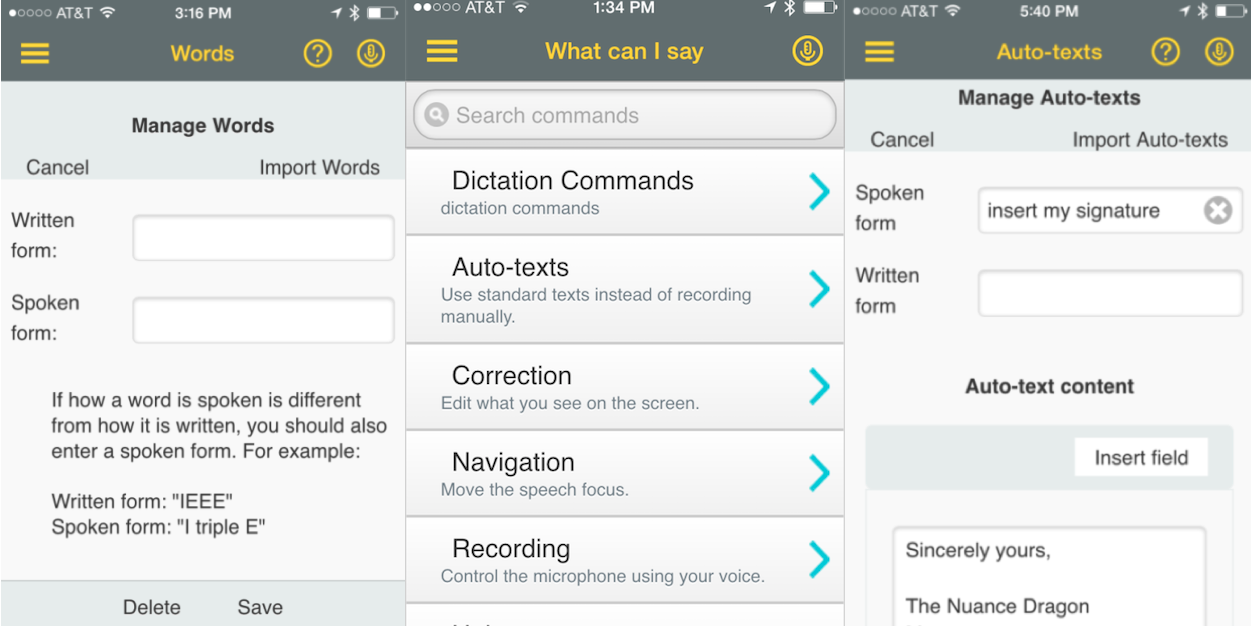 Earlier this year, popular speech recognition company Nuance announced that it was launching a new iOS app with a plethora of new voice recognition. We covered the new app in detail in August, but now, Nuance’s Dragon Anywhere app is available...

Show me a paradigm that won’t wake a sleeping baby and I might believe it. Otherwise, manual input of data through something like a keyboard is here to stay.

They call it Silent Speech, using ear- and tongue-based sensors. They may be able to improve it so that the latter sensor isn’t needed at all.

Cool. That would be interesting.

I suspect the problem with all such systems (voice related) will be comprehension. Sure, that will get better, but I think to get it to work really well would also require people to change how they speak. For example, the “code” we use now just to get started (“Hey Siri”, etc). There would be other things though. Suppose you need to spell something that the computer would not otherwise get right. Well, you need a code word or phrase to warn that you actually want to spell something rather than be using the word “spell” (or whatever is used as the code word) in a normal way that is not followed by individual letters.

I think they will make lots of progress on these things, but I don’t think they’ll be able to avoid some conflict in how we use words - thus the need for people to learn to say things differently than now.

Homonyms/homophones will be a problem. Speed too, since I can often type faster than I can speak.

Research and experimentation is all good.

I can often type faster than I can speak.

Really? I just tried and failed:

Try it yourself at

BTW, the Scorcher’s dictation didn’t sound rushed at all at 154 wpm. A fast end-of-commercial speaker or auctioneer could dictate much faster, if a speech recognizer could keep up.

Well, you need a code word or phrase to warn that you actually want to spell something rather than be using the word “spell” (or whatever is used as the code word) in a normal way that is not followed by individual letters.

In Dragon Naturally Speaking you say “Spell That” and then pause speaking to bring up a dialog that allows you to do correction dictating the letters of a word you want to enter. If you just speak letters in normal dictation mode, it still does pretty well at picking them up but assumes that you are entering an abbreviation and uses all caps,

Look up David Weber - he’s uses Dragon. He’s talked about it (started when he broke a wrist.)

Unless I’m completely alone, I really prefer typing just for privacy - I don’t necessarily want everyone in my office area / coffee shop / house / airport / etc listening in to every input I have to my device. When in private I don’t mind talking to Siri (to the extend I can get her to comprehend what I want, and it is improving - slowly) - otherwise they’ll have to wait for some sort of direct neural connection (although the ‘silent speech’ thing sounds interesting). That, and I can’t say I’ve ever really enjoyed editing my input with voice commands - and I find I do a fair bit of that.

I’ve read most of the books by David Weber. I started reading one of the Honor Harrington series and a friend in the science fiction community pointed out that if you buy the most recent hardback, it came with a DVD of prior books in digital format which I uploaded to my Kindle account. I wasn’t aware that he was a Draqon user though.

I’ve helped several people get started using Dragon Dictate / Dragon Naturally Speaking over the years. if you’re going to do voice dictation on the PC, the most important thing you can do is invest in a decent digital microphone to insure the quality of the audio being sent to Dragon. I’ve been satisfied with the Andrea Electronics NC-181VM USB headset which is less than $30 on Amazon. Currently I’m using a Blue Yeti desktop microphone so I don’t have to be bothered with taking the headset on and off. It’s also helpful to have a quick PC with additional memory.

If you are going to dictate a large amount of text without proofreading as you go, it’s a very good idea to purchase the premium edition (or above) of Dragon NaturallySpeaking so you can use the playback feature. Playback allows you to listen to recorded audio received by Dragon NaturallySpeaking in order to make corrections to the transcription at a later time within the same transcription session.

Voice dictation isn’t for everyone or every situation. One of my good friends is an author who says that typing is an important part of his “writing process”. For some things, such as coding, attempting to use voice dictation is more of a hindrance than a help to me. But for doing long stretches of documentation in the quiet of my office, I find that voice dictation is considerably faster than I can type.

An issue for me is the problem of making complete sentences without any “um”, “uh”, etc. Anything that handles that?

Then there is the problem of getting tangled up in what you wanted to say simply because the thinking process is different - and aggravated by saying things that aren’t a natural part of communication such as giving punctuation commands.

I’m at about 83wpm with similar accuracy. My biggest problem is that the Linux command line is not conducive to speech to text. And that’s most of my daily typing.

An issue for me is the problem of making complete sentences without any “um”, “uh”, etc. Anything that handles that?

Pauses are not an issue as I have the auto-punctuation turned off. Dragon NaturallySpeaking ignores “um”. Likewise it tends to ignore the word “uh” but may at times misinterpret it as another word. If it does pick up something you didn’t want and you are proofreading as you go, you can say, “delete” along with the word or phrase to delete. If the last thing entered needs to be deleted, you can just say “delete that”. When I write longer documents, I tend to dictate sitting back with my eyes closed (focusing on what I want to say) and proofread/edit after I’m done dictating.

Just like learning to type, there is a learning curve to using voice dictation. By the way, this post was entered using Dragon NaturallySpeaking.

I’m sure some shortcuts can be found for this problem. I program a lot, and saying left-parens and right-parens could also be elpah and arrpah…

Um, about that… In another window, I just typed:

@client domain@ is filtered, but the rest is a direct cut and paste (edited since the syntax kept getting interpreted)

Maybe the FedEx guy from the old commercials could speak that faster than typing it out, but that’s not a skill set I possess.

Yes, it’s possible. But is it plausible? Does it make sense to put forth that amount of effort to force something to work?

There is no single perfect solution for every use case. Putting too much effort into attempting to accomplish that results in products that never ship. Or which create such high expectations that they ultimately fail to deliver.

Her is another technology on the horizon that could replace keyboards for some. My first though is it would be a good input device for sign language. Actually, my first thought was the input method from Minority Report. 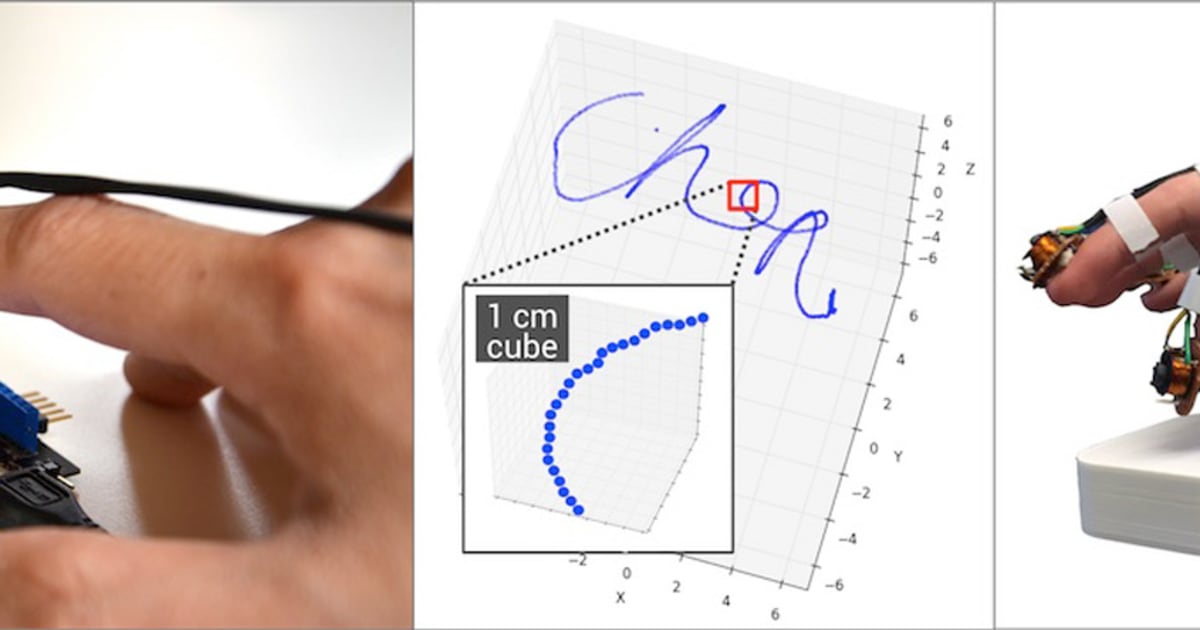 Magnets could soon track your fingers in virtual reality

One day, you'll grab objects in VR thanks to a combination of electromagnets and sensors.

55 wpm is pretty slow for typing. It’s not the mark of a strong touch typist.