Since March this year I have been stuck in The Netherlands, not being able to return to our home in Australia. It’s no hardship - we have a nice holiday place here that is quite comfortable. But I had arrived without any devices other than my phone and rusty old iPad. Now that we know it’s going to be more permanent - at least another year - before we return home, I am building up my home office to support my writing and coaching engagements a bit better than constantly borrowing my wife’s old MacBook.
I have spent some money on getting an iPad Pro 2020 and it’s serving me nicely. I can do pretty much everything I need to do on it. Apart from getting the actual production level TB, I think a separate monitor would be all I need to be a happy camper.
I have seen some interesting discussions in this forum on the kind of monitor to buy for a Mac Mini, including the suggestion to go for a TV instead of a monitor.
So, to anyone that may have already tried it: does anyone have hands-on experiences with using an iPad Pro (2019 or 2020 models) with an external monitor. Any advice, anything to definitely avoid?

You’ll want a monitor that supports USB 3.1 USB-C interface as the iPad Pro does not do Thunderbolt 3 USB-C. Meaning Thunderbolt 3 only monitors such as the LG 5K do not work but the LG 4K will. Some monitors will provide enough power over USB-C to charge the iPad Pro while others will not.

You could use a USB-C to DisplayPort cable which if you can’t do USB-C to USB-C would work the best. I would avoid HDMI as it is limited compared to DisplayPort.

Another gotcha is some Apps can support dual screens on the iPad.

Finally, you can send the video wirelessly to say an AppleTV but there is some lag and things might be too small on the screen, etc. But perhaps a small 4K TV screen and a USB-C to HDMI cable might be fine. Again, the display ratio is mostly 4.3 or 3.2 on the iPad. It’s not 16:9 or 16:10 so expect black bars on the sides with a wide screen monitor / TV.

I would get some cables and try it out on existing TV’s and monitors if you can before you buy something. Or perhaps bring the iPad to physical store showroom if that’s even possible in the COVID-19 environment. 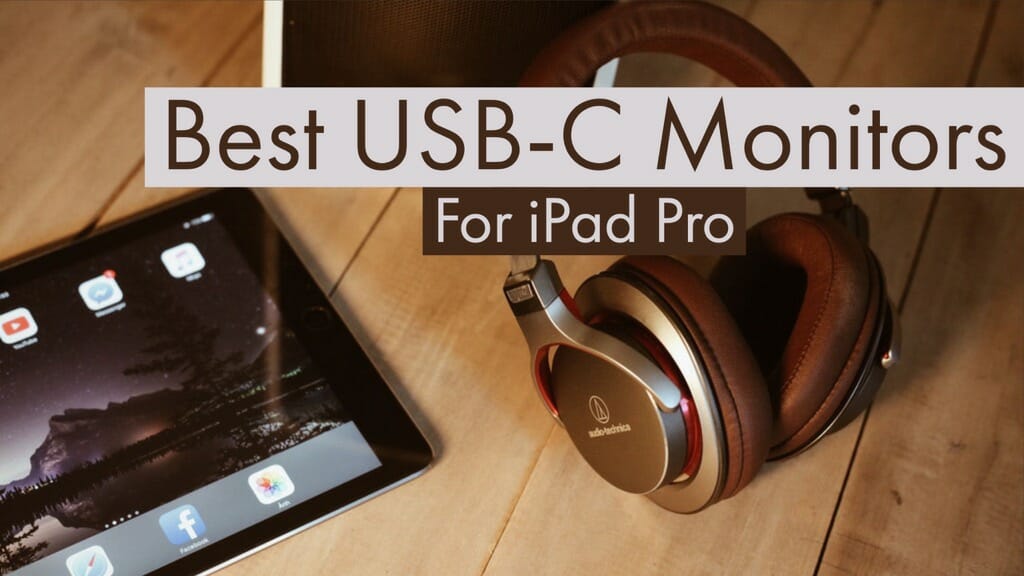 One of the most widely used accessories by major giants like Apple, Samsung, LG etc is USB Type C ports. The technology is liked by almost everyone and is used by professionals in huge amounts. It is one of the most compatible and versatile options...

An update on LG’s 43" displays: they switched from IPS to VA on most of the 43" displays. The VA looks like garbage because viewing angle is really important, and also the backlight is almost 1cm behind the panel so the edges are not usable up close. If you’re in the US, Walmart carries the 43UN7300PUF with may or may not be IPS. The only way to know is to check the shipping box to see if it says “Real 4K IPS”. LG just updated their website and now the 43UN7300PUF is no longer listed as an IPS …

“It’s an amazing display! I can’t believe my eyes!” 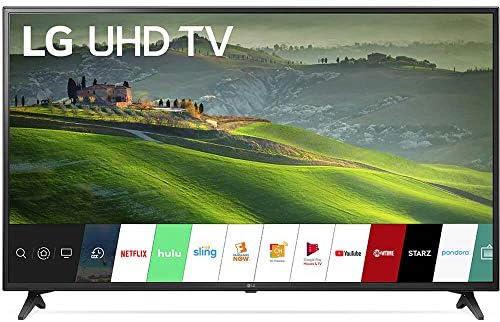 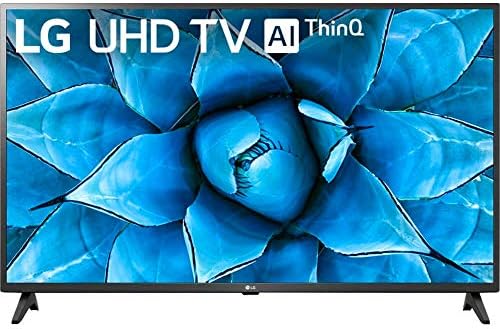 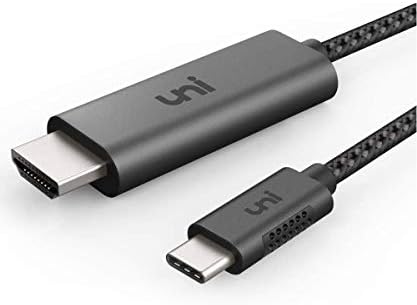 As JBrickley points out, ipad os firmware typically puts up black bars at flanks due to aspect ratio difference, but annecdotal reports of some apps already doing the config work to get full screen.

With time, that should be more widespread.

Still, even with letterbox format bars, 43 inch 8.3 million pixel screen is a joy to behold.

Many TextBlade users have gotten these for around $250 on special sales.

Many TextBlade users have gotten these for around $250 on special sales.

I’m pretty sure I am, in fact, USING a textblade. For hours, every single day.

Does anyone have any info on what to look for in Europe? The US models are not sold here.

There should be some comparable models for the euro zone market.

Model numbers for Europe will be different, but the search parameters should surface them.

For our lucky American friends, WalMart still sells the LG 43UN6950ZUA (only 6 left! And it got taken off the search results!) for $228. Update: now they have more, and it appears in their search results.

LG’s website (where the same model also mysteriously disappeared from LG’s search results) lists it under Specs as “Real 4K IPS Display” confirms it is IPS.

If there’s one thing that sucks about being Canadian, this is it. We can’t get 43" LG IPS displays. When I spotted the 43UM6910PUA 2 months ago from BestBuy, I was so excited I wanted to share the link. But the moment I hit “Buy” it became de-listed from BestBuy. I got the one and only display in all of Canada. It was ridiculous. They had to un-ship it from the store in Winnipeg, and back to the depot, past all the melted igloos, and finally to my home. And I couldn’t keep it because I have a creative friend who works with 4K video, and, goshdarnit Canadians just won’t let another Canadian who needs it more than they do, go without.

If not in stock at Walmart, Best Buy has a slightly newer model for $249

And a friend of mine found the 43UN6951ZUA was recently added to Walmart Canada (limited quantities):

If I may offer a counterpoint here, I do agree that a 4k display is wonderful, but depending on your eyesight 43" may not be.

I use a 4k 13” laptop, which is glorious at a higher DPI than Apple, and a 27” 4k LG USB-C monitor which doubles as a charger, and has very thin dot spacing and therefore no visible raster. I put one below the other and put it pretty close so I have an eyesight-filling display surface.

Whereas with a 43” display the DPI will be much lower, there might be visible raster, and I’d have to put it farther away, where my eyesight is not as sharp, and being a TV it won’t charge my laptop.

On my 43 inch LG, I don’t see any issues, though maybe if I compared it side by side with, say, a 27" imac screen, I might. But I never had a retina type screen on a computer before (just phones and tablets) so my comparison is to a much poorer screen where letters were definitely not super crisp. No problem with this TV other than my own eyesight (can’t seem to get glasses that really work just right for some reason).

But since it is much better than the pre-retina iMacs, other things become important. So on my 21.5 old iMac I would work hard to get my many windows structured in such a way that I could, no matter which window had the focus, I could click some part of every other window.

Yeah, I could also click the app in the dock, but for whatever reason, sometimes that just wasn’t as natural a process for me. And then there was the issue of one up but maybe multiple windows of that app.

But now, with such a big screen, normally nothing overlaps another window at all. I did find it useful to set up 3 desktops though. The first two have the stuff I use the most. To change desktops I have two choices. One is to click on the app in the dock, which for me is on the right side. But I also have “uBar” which sits at the bottom with all my active apps. Usually I find it more convenient to click there, but both come in handy. Oh, I do keep mail showing on all desktops since I always want quick access to that.

The third desktop is for stuff I want handy, but only occasionally access.

I’d hate to think what a monitor of this size would cost! And it has the advantage of being a TV when I want it to be. Though I sure wish there was some way to have it show the computer desktops but have a picture in picture for the TV. I tend to have the TV on most of the time, while mostly focused on computer stuff. Having a little PIP (sizable, hopefully) in the corner would be very nice. Would have to have sound, of course.

Actually, I use keyboard shortcuts to switch between fullscreen applications. On Mac, I used to use Quicksilver to “toggle applications” but there must be several tools. On Windows, I used AHK, and on Linux, right now I’m using keybindings for the dock that Mutter handles.

With the TB, I bind e.g. Media+K to shift-ctrl-alt-cmd-K, and that starts or switches to VS Code. I also have Chrome, terminal, …

Wmertens - ‘faster than a mouse’ speaks to the intrinsic power of a keyboard.

If you leverage its potential to use all fingers with low-effort motion, rather than exerting your whole arm and wrist to move a larger puck, labor is vastly reduced. Especially when you can jump to another layer mapped with mouse functions, without really moving your whole hand or arm at all.

Moving your hand from home row to a separate mouse takes much more time and labor, than doing it right from home row.

That is another reason why we have built the new firmware infrastructure, it vastly increases the ability to allow custom mouse mappings, which has been a recurring theme and request among users.

Still, the fine vernier motion of a mouse has a unique utility that will retain its value, and we have a new companion accessory in the works to make that capability much better than legacy mice. But regardless of the kind of mouse, intelligent mouse-key mappings can largely subsume the majority of mouse labor, where the principle purpose is to select a function.

As to 4K monitors, 8.3 million pixels is useful independent of scale. For people who are very nearsighted, they may prefer a smaller screen at closer range, but for average vision 43” at 2-3 feet away is a very satisfying experience.

I use keyboard shortcuts to switch between fullscreen applications

Well, I’m almost never doing “full screen”. I just have the full window showing, but that window is, on average, taking up just 25% of the screen.

And often I’m not typing anything so my keyboard is set aside and I’m just using the mouse to move around windows and tabs.

Pixel density is about the same as a 22" 1080 display, but you have 4 of them, all stitched together.

I’m running two 22” monitors at 1080p at my main workstation. They were fine when I got them six years ago, and even now they don’t bother me, but I sure will be getting 4K when these monitors finally shuffle off.